People frequently ask me where I’m from.  I usually tell them, “Near Cumberland, in Western Maryland”.  Then they ask me how close I am to other cities along the East Coast trying to get an idea of where Cumberland is located.  Most people give up playing the ‘where is Cumberland’ game with a smile and nod, then telling me that they love Maryland crab cakes. I politely smile and say, “me too”. 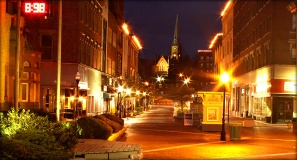 On a recent trip, an elderly lady asked an unexpected follow up question that I was not quite prepared to answer: “What’s it like living in Cumberland”.  After my jerk reaction of saying “cold” because it was January, I tried to regroup and describe some of the great advantages of our area. The lady smiled and nodded and I knew the moment had passed to let my hometown really shine.  As I sat in the terminal stewing about my frazzled answer, I thought, “Cumberland has so much more to offer other than…cold”.  It dawned on me that ‘Non-Marylanders’ are not familiar with much more about Maryland other than crab cakes.  An even smaller handful of people realize that there are mountains in Maryland with fantastic cities. I would like a second shot at the question, “What is it like living in Cumberland?”  The answer of course is: “Fantastic! May I share the great things about Cumberland with you?”

Cumberland is a city in the western, mountain portion of Maryland. (Yes, there are mountains in Maryland!)  Historically Cumberland was known as the “Queen City of the Alleghenies,” as it was once Maryland’s second largest city. Cumberland became a stop for many during the push west; several railroads and the western terminal of the famous C&O Canal were (and still are) located there. In this role, the city grew into a transportation hub as the starting point of the first National Road.  As the city raced through the 19th century and into the 20th, Cumberland became less dependent on railroads as more industry moved to the area and the “Queen City” prospered.

Cumberland experienced the same fate as countless other American cities in the latter quarter of the 20th century; many industries closed their doors leaving much of the city out of work.  But the natives in Cumberland were (and still are) resilient; they utilized the rich history embedded in this area. Cumberland offers many historical places to visit including George Washington’s Headquarters, Fort Cumberland, The C&O Canal and a historic train station.  Small firms began to crop up focusing on tourism and Cumberland was off and running into its next era.  The economy continued to perk up as a number of technological firms and moved to the area.  The future looks brighter now than it has in a century, essentially because Cumberland Maryland has something that most people are seeking – a great quality of life.

Click here to check out what is happening in Cumberland MD today!

Cumberland is around 945 feet above sea level and that altitude contributes to the average 35 inches of snow that falls there each year.  With cool mountain summers and mild winters it is a playground for outdoor enthusiasts. Close to several resorts and only 2 ½ hours from Washington D.C. or Baltimore, Cumberland can be in the middle of the action yet far enough away to be a mountain sanctuary.  The City of Cumberland features excellent school systems (both public and private) and is home to Allegany College of Maryland; a two year undergraduate school. The new Western Maryland Regional Medical Center is located in heart of Cumberland and offers a comprehensive range of health services for the tri-state area.  Many recreational parks, playgrounds, sports fields and several community youth activities enhance the quality of life in Cumberland and provide safe, accessible, year round activities for its residents.

Quality of life is crucial to Cumberland residents; great neighborhoods, culture, entertainment and all the conveniences one would expect in any urban area.  Cumberland, however, still has a small town atmosphere even though it is a metropolitan city. The humanities are also a foundation of the Cumberland community. Cumberland plays host to several annual festivals, music performances, literature events and art exhibitions.   Many shops are within walking distance of the residential areas.  Downtown has a tree lined mall where one can enjoy outdoor dining and live entertainment most summer nights.  Stroll the tranquil paths along the C&O waterways or hop on the scenic rail road to enjoy the geographical beauty of Cumberland.  Most residents have called Cumberland their hometown for generations because it is difficult to find anywhere else with a great lifestyle that can be found within the “Queen” city of Cumberland.

I hope that you get the opportunity to experience for yourself what it is like living in Cumberland Maryland.  It is a fantastic city with a small town atmosphere, determined people and a great quality of life!

Find Your Next Home

Check out the latest homes for sale in Western Maryland and beyond in one easy location! www.CarterAndRoque.com